“Though my office colleagues are one of the most intelligent people you’ll encounter, they also thrive in the sleaziest and darkest façade of humor with the attention span of a fruit fly.“

I can vaguely recall the logistics of this mountain except that it was part of a trilogy hike and perhaps born out of a plethora of pantry topics among office colleagues.

We frequently do that. Jump into an endless pool of discussions ranging from politics to hypothetical existential questions, gender equality, business, and its financial ramifications, travel, pop culture, and pseudosciences. Funny enough, all topics have been intentionally susceptible to sexual innuendos and always elicit raucous laughter. Though my officemates are one of the most intelligent people you’ll encounter, they also thrive in the sleaziest and darkest facade of humor with the attention span of a fruit fly. And that’s a heartfelt compliment.

So, this trilogy hike was perhaps another offshoot from one of those conversations. A spur of the moment topic to go out there again, be with nature. And reduce the cognitive load from work. To chill.

And so off we go.

The terrain seemed friendly for trail runners and we exchanged a few pleasantries with them along the way. Beyond that, it was a peaceful hike, not as notorious as the other mountains in the Sierra Madre range. I can still hear my labored breathing from a few assaults.

We reached the summit of Mt. Ayaas a little shy of seven in the morning. I remember Gretch running back and forth to one of its hills only to resemble the size of an ant in the photo. We were smiling ants. While Alex found solace from the heat under one of those young trees with leaves enough for a makeshift canopy.

Frankly, there’s nothing too imposing about the summit of Mt. Ayaas. It’s a boring patch of land with a selfish attitude towards those seeking shade from the heat. No grandiose rock formations craving for cliche poses as I would heartily give to other demanding mountains. It’s not a cradler of a fancy admirer. Nor a panzy.

No, don’t expect anything. Just accept it as it is.

Simply love it. Its unassuming beauty. Its topography and pleasing warmth. I wish I could tell you more about how I felt about this mountain.

But how do you elaborate on a simple love? A Bowl of Assorted Fruits in Bali and One of Those Cliché Fitness Stories: How Did It Start Really? 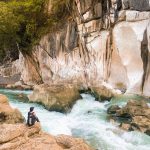 Is it Sweeter the Second Time Around? Revisiting Tinipak River. Literally.

A Foot Towards the Unknown

Falls Hope and Writing: This Isn’t Your Guide at Lake Sebu, South Cotabato